Why aren’t there more women executives on boards?

Gender diversity at board level means more profit. So why are we not at 50% yet?

Fortune-500 companies with the highest number of board-level women can enjoy ‘42% greater return on sales’ and ‘53% higher return on equity.’ Firms with just one woman on their board are 20% less likely to go bankrupt, while British, American and Indian companies with male-only directors ‘missed out on £430 billion in investment returns’ in 2014. 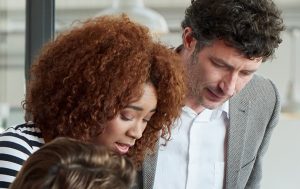 The benefits are clear, and the studies have been undertaken again and again, but the number of women at board-level, in C-level roles and in corner offices, remains worryingly low across the world.

In the US, women hold just under 20% of board seats, and 24.6% of those companies have just one woman director. Norway (46.7%), France (34.0%), and Sweden (33.6%) have the highest proportion of female board members in their biggest corporations, but it’s rare they achieve parity. In Europe as a whole, women hold just a quarter of board seats in publicly listed companies. 29% of 2017’s new board members in the UK are women, which is actually down compared with 2014 and 2012’s results.

Obstacles come from the top

To work out why entry to board level is such a different experience for women, businesses need to pinpoint where progress stalls. McKinsey’s survey of 222 US companies and 12 million employees found that fewer women are hired at entry-level positions, and their representation continues to decline as you search up the hierarchy. And don’t think that employers have fewer candidate choices; women actually hold 57% of university degrees in the US.

Examine ethnic diversity and the picture gets much worse. While one in five C-level roles are filled by white women, just one in 30 is filled by a woman of colour. McKinsey’s study highlighted that black women are less likely to interact with senior leadership and they’re the group least likely to be promoted within a company.

The survey also found that women have the same intentions as their male counterparts and the same level of ambition. If women joining a company ‘were promoted at the same rate as their male peers, the number of women at the senior vice president…level would be more than double’. Perceptions of women’s abilities, a workplace controlled by senior men, and fewer female decision-makers to advocate for them, makes the climb to the top harder.

Women make the majority of buying decisions throughout the world. In the US, their purchasing power is worth $5-$15 trillion annually, and they control 51% of personal wealth. Breadwinner status, educational level, and labor participation are all up, but women are underrepresented in the decision-making roles that directly influence the products and services they buy.

A room of people who fit one specific demographic can’t universally cater to people from different backgrounds with different needs. A diverse board of decision-makers is more equipped to move quickly through the market and outsell their competitors, but many publicly listed companies still need to be reminded they have no female participation on their boards.

Handing leadership roles from one man to another

The McKinsey study found 50% of men think women are well represented in their workplace already, despite the stats not remotely supporting this. 15% of men think it’s going to be harder for them to be promoted as the landscape changes and women advance further.

The bare truth is that board members are more willing to open the doors to people who are just like them, and if the current crop of executives is predominantly white and male, women are unlikely to get many seats at the table unless the promotion process changes.

A survey by Women Corporate Directors and Harvard researchers found the main reason cited by male board members for not welcoming more women is ‘a lack of qualified female candidates’. Mentorship and networking created and controlled by women can change this inaccurate perception, and shine a brighter light on an untapped pool of female talent.

Women in senior roles have the power to recognize the achievements of women beneath them and make sure their fellow board members pay more attention. At director and senior management level, recruitment and promotion needs to focus on women’s achievements just as much as men’s, or male-dominated boards will continue to claim they have limited choice and the picture will remain the same.